How to grow Potatoes

This entry was posted on 1st February 2017 by Judith. 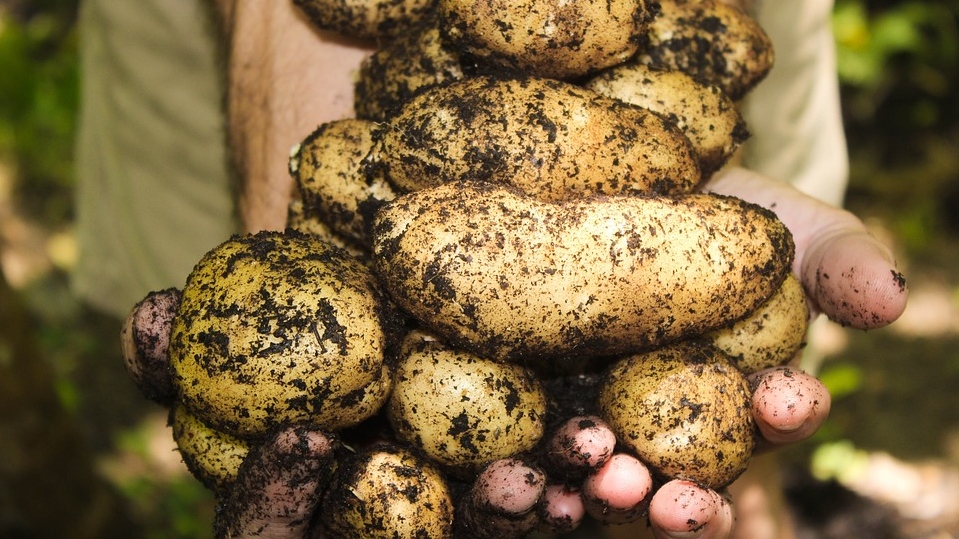 Earlies:   Very good if you only have a small area. As they are lifted earlier, they are less likely to encounter problems such as wireworms, slugs and blight. Earlies are ready 15 - 16 weeks after planting in March onward.  Only plant when the conditions are right - be patient!

Maincrops:   Maincrops take 18-20 weeks to mature after planting in mid-April onwards. These take up the most space in the garden, but they are the best varieties to store.  They also will have a higher yield. 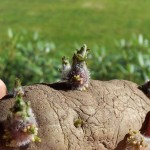 majority of 'eyes' at the top.  Soon the seed potatoes will produce strong sprouts - this will help the potatoes get off to a good start when you plant them. This is especially true of earlies. Place them closely together so that they remain standing in the same position. Store the trays in a frost-free shed, greenhouse or a cool room in the house where there is plenty of light. The practice of cutting large tubers in half is not advisable as it encourages disease.

Potatoes should be grown on deep, fertile soil that is well drained and contains plenty of organic matter. Choose a sunny position in the garden but avoid exposed sites and frost pockets, these delay the developing foliage. Potatoes need potash so dig in plenty of well rotted manure, compost and seaweed or approved organic potash fertilizer. Do not add lime - potatoes dislike lime and its presence in the soil appears to encourage scab. 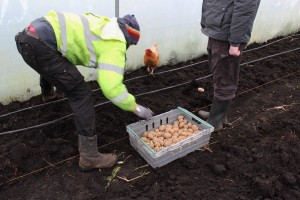 Planting can commence as soon as the soil is warm enough - the end of March for earlies and April/May for maincrop. Dig trenches 12/15cms deep, putting the soil to one side. Place the potatoes in the trench with the shoots pointing upwards, cover with soil.  Don't plant too deep as it is colder for the young plants.  Cover with horticultural fleece or straw if frost is forecast.  Plant Earlies 30cm apart in rows 40-50cm apart.   Plant Maincrops 40cm apart in rows 75cm apart.

When the shoots appear, use a draw/ridging hoe to pile up the soil over them (earthing up). The shoots should be just buried and a small ridge created on either side. This should be done about three times, or until the haulm (foliage) is too big to cover. Earthing up protects the tubers from frost and reduces the number of green potatoes. It is particularly important that potatoes have adequate water. Unless there is a regular, ample rainfall, the size and quality of the crop will be reduced. To increase yield you can give the plants a potash rich liquid feed every two weeks - liquid seaweed, liquid Horsetail or Vinasse are very suitable for this and would be much appreciated. 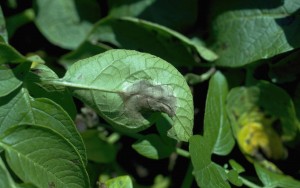 Potato Blight  -  responsible for the Irish Potato Famine - is a serious fungal disease that can wreak havoc with your potato crop.  It can be avoided but for domestic growers there is no way of treating the disease once it has made an appearance in your crop.

What is potato blight?
Potato blight  is caused by a fungus-like organism Phytophthora Infestans. It spreads rapidly in warm humid weather causing collapse and decay of the foliage and rapid tuber rot.
Blight spores are produced on infected leaves and are dispersed by the wind to neighbouring plants and gardens.  Spores spread quickly on damp leaf surfaces and during wet weather they are washed off leaves and down the stems into the soil where they can infect the developing tubers. 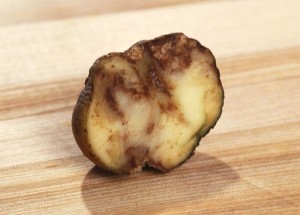 How do I recognise potato blight?  Healthy leaves will develop brown patches and effect the whole leaf which will soon dies off.  Infected potato tubers will  have a brown discolouration on the skin and a brown marbled appearance to the flesh when cut. The tubers are firm initially, but will rot in storage.

What can be done to control Blight 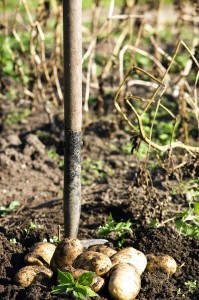 flowers start to appear. Cook immediately so that the flavour is retained. Maincrop are best lifted as the foliage starts to die back in the Autumn. Late Maincrop should be left in 'till October even if the haulm has been cut off as a blight control. This will improve flavour and ensure that the skins are properly matured.

Maincrop potatoes should be stored in potato sacks in a cool, dark, frost free shed. Check regularly for signs of rot. Keep an eye out for vermin. The ideal temperature for storing potatoes is between 5° and 10°C. Too warm will reduce storage life but too cold can be worse. Below 5°C the starch begins to turn to sugars and the potatoes will develop an unpleasant strange sweetish taste. Bringing them into the warm (around 15°C) for a week or two will usually cure this. If the temperature has fallen to around freezing or below, the potatoes will not only taste strange but become mushy and probably start to rot when the temperature rises. 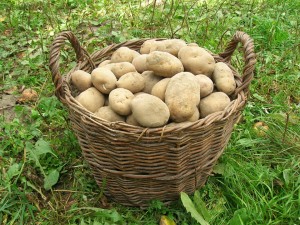 Good crop of potatoes - makes it all worth while.

Do you know how Seed Potatoes are produced?  This fact sheet from  The Potato Propagation Centre, Raphoe, Co Donegal explains all. Potato Seed

This entry was posted in All Articles, Grow-How, Products, Small & Starter Growers and tagged Potatoes, Growing, How to.. on 1st February 2017 by Judith. ← Previous Post Next Post →