Flea Beetle and How to Control Them

Why are there holes in my Rocket?

These tiny (and unsightly) holes that have appeared (often suddenly) in the leaves of young Brassica plants are the distinctive damage of the rarely seen Flea Beetle and can be very off-putting to the beginner gardener.

WHAT ARE FLEA BEETLES

The term Flea Beetle is used to describe a number of different species of beetles of the Chrysomelidae and they are found throughout the World. Flea Beetles are very small (usually 2- 3mm in size), shiny and oval shaped, and they can be dark blue, greenish purple or black in colour.

As their name would suggest, flea beetles are jumping beetles with enlarged hind legs that allow them to jump several centimetres at a time. They are also strong fliers, moving onto plants from neighbouring fields and weedy borders. 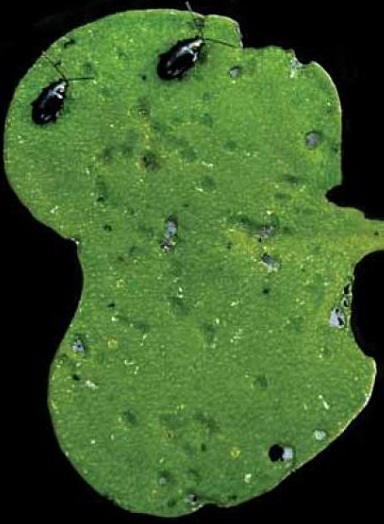 Due to their tiny nature, they’re really only the size of the head of a pin, fleas beetle are often missed in the garden so it’s important to keep an eye out for the damage that they cause, to try and catch them early. They are voracious feeders that chew numerous small holes in the leaves, giving plant leaves a distinctive lacy look. When populations are high, flea beetles can quickly defoliate plants entirely and kill many plants in an attack.

They attack many different types of plants but especially love seedlings. Generally in the small garden, they cause most damage to Brassicas, also known as the cabbage family.

The most severe attacks occur during sunny, calm weather as the beetles feed most on sunny days and can easily fly on still days.

What can I do to control Flea Beetle?

Unfortunately there is no quick way to eradicate flea beetles without resorting to nasty pesticides – and no one wants to eat those! A pyrethrum spray could be used but as this spray works on contact with insects, in practice it is difficult to use because flea beetles are so small.

They also have the annoying habit of jumping off the leaves of the plant when disturbed and jumping back on later!

Tercol can help to control soil insects as it helps to strengthen plants as well as deter insects but it
generally needs to used in tandem with other strategies.

The best approach for the organic garden is a series of longer term strategies.

Unfortunately, there is no easy quick way to completely overcome this annoying pest but with a series of long-term strategies it is possible to control them and the amount of damage that they do.

This entry was posted in All Articles, Grow-How and tagged Pests, Turnips, Radishes on 20th June 2018 by Muireann. ← Previous Post Next Post →