June 21st is the longest day of the year here in West Cork and the rest of Ireland.  If there are no clouds then we should get about 17 hours of daylight (woohoo!) with the sun rising at about quarter past five and setting just before ten. In terms of daylight, this day is 8 hours, 22 minutes longer than on December Solstice. This is due to the earth's axis and rotation. Instead of being straight up and down, the earth is actually tilted about 23 degrees. So as the earth rotates on its axis, parts of the world are tilted either closer towards the sun or farther away depending on the time of year. 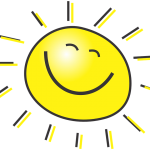 he winter solstice. On a normal day, the sun appears to rise in the east and set in the west. For the summer solstice, though, the sun rises north of east and sets north of west, which means that we see the sun in the sky longer than usual. For a three day period around the solstice the daylight length changes only minutely - giving the impression that the sun is standing still. That's actually how we get the word solstice. It's derived from the Latin word solstitium. Sol means 'sun' and stitium means 'to stand still.' So during the solstice, the sun seems to stand still in the sky.

Measuring the time of year is not just important for plants to be able to schedule flowering, but also so they know when to produce storage organs (such as tubers) and when to begin dormancy. Temperature is not a reliable indicator of the time of year because it fluctuates too much (and no two years are alike).  The plant relies on day length (more accurately the duration of darkness) as a more reliable indicator of time of year.

Every plant for which flower initiation is light-dependent (and not all plants are) has a critical day-length associated with it. The term long-day describes plants that begin forming flower buds when the days are longer than their critical day length. The term short-day, on the other hand, describes plants that begin flowering when the days are shorter than their critical day length. Day-neutral plants form flowers independent of day length – their trigger is maturity. Generally, long-day plants flower in summer; short-day plants flower in spring or autumn

Long-Day Plant (LD): A long-day plant requires more than12 hours of sunlight, or less than 12 hours of uninterrupted darkness, to produce a bloom or flower.

Most onions will make top growth (the green part above the ground) until a critical day length is reached, triggering bulbing.  Bulbing generally begins when there is about 14 hours of light per day.  If you plant your onions in the early spring, they will be fairly large plants when the days get 14 hours long.  Large bulbs will be the result.  If you wait to plant your onions until the end of April, when days reach 14 hours, bulbing will begin immediately and smaller onions will be the result.

Short Day Plant (SD): A short-day plant requires less than12 hours of sunlight, or more than 12 hours of uninterrupted darkness, to produce a bloom or flower.

Day-Neutral Plant (DN): Day-neutral plants do not initiate flowering based on photoperiods. Many of these types of plants instead flower after reaching a certain developmental stage or age.

No matter its sensitivity to day length and darkness a plant will not experience growth with fewer than 10 hours of daylight. Even if day-neutral plants like cucumbers, tomatoes and lettuce are grown in climate controlled environments with enough heat to grow and produce, they will halt their growth and remain dormant when day length dips below 10 hours.

Because most plants won't grow when they receive less than 10 hours of daylight, winter greenhouse production requires supplemental lighting, as well as supplemental heat. Lights can be turned on shortly before sunset to extend the length of the day

The short days of winter have long nights. If a grower breaks up those long nights by turning on lights in the middle of the night, some plants will act as though the night is short (and, therefore, the day is long), and behave just as they would in the middle of summer. Many bedding plant and cut-flower greenhouse producers use night-interruption lighting to force flowers to bloom in winter.

The response of plants to the relative length of day and night is called photoperiodism.

This entry was posted in All Articles, Seasonal and tagged Growing, Onions on 20th June 2018 by Judith. ← Previous Post Next Post →