This entry was posted on 20th November 2019 by Fruit Hill Farm. 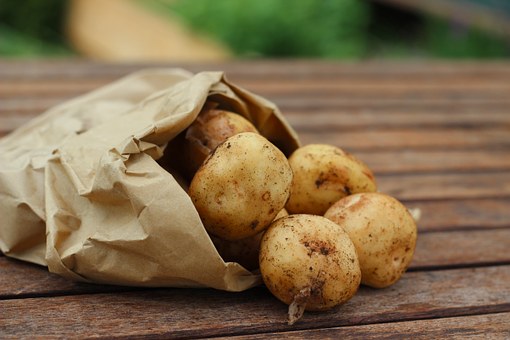 Earlies or new potatoes are quick off the mark and are ready 15 - 16 weeks after planting. If you have a polytunnel or greenhouse then you can plant them in December or January and have very early potatoes on the table in March and April - depending on the weather.

Chitting is basically another word for sprouting.  By getting the potato to sprout you have started off the growing process so that the plants will have a head start when you put them in the soil.  In theory you will then get your potatoes a bit earlier. 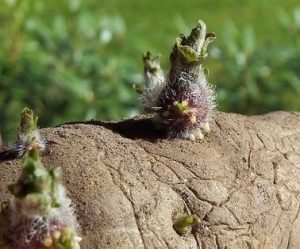 Shoots on a chitted potato

Potatoes will start chitting when exposed to light and heat, so place seed somewhere warm and light. A temperature of around 8C-10C is fine.   Avoid locations that might get frost. Place the seed potatoes in a single layer with a large amount of eyes facing up. If you’ve only got a small amount of seed potatoes, recycling old egg boxes for this purpose is ideal. For larger amounts, use seed trays or wooden boxes.  Keep the tubers upright by supporting them against each other.

Once your seed potatoes have got 2-3 good sized ‘chits’ or sprouts on them (about 2cm), it’s time to plant.  The sprouts should be small, knobbly, and green/purple in colour. If you end up with long, white coloured sprouts, it means there’s not enough light.

Potatoes should be grown in deep, fertile soil that is well drained and contains plenty of organic matter.  Potatoes need potash so dig in plenty of well rotted manure, compost and seaweed or approved organic potash fertilizer. Do not add lime - potatoes dislike lime and its presence in the soil appears to encourage scab.

For very early earlies you will need to plant in a polytunnel or glasshouse.  Dig trenches 8/12cms deep, putting the soil to one side. Place the potatoes in the trench with the shoots pointing upwards, cover with soil. Don't plant too deep as it is colder for the young plants.   Plant Earlies 30cm apart in rows 40-50cm apart.  You can also plant in largepots/containers or even rolled down compost sacks (make sure to put holes in first).  These should be filled with good quality potting compost and a small amount of general purpose organic feed (such as Greenvale).

The wait is finally over! When the plants are looking mature and have been growing for between 80 and 100 days, have a look to see how the crop is doing - you should be ready to harvest some delicious early potatoes.

This entry was posted in All Articles, Grow-How and tagged Potatoes, Organic, Small Gardens on 20th November 2019 by Fruit Hill Farm. ← Previous Post Next Post →