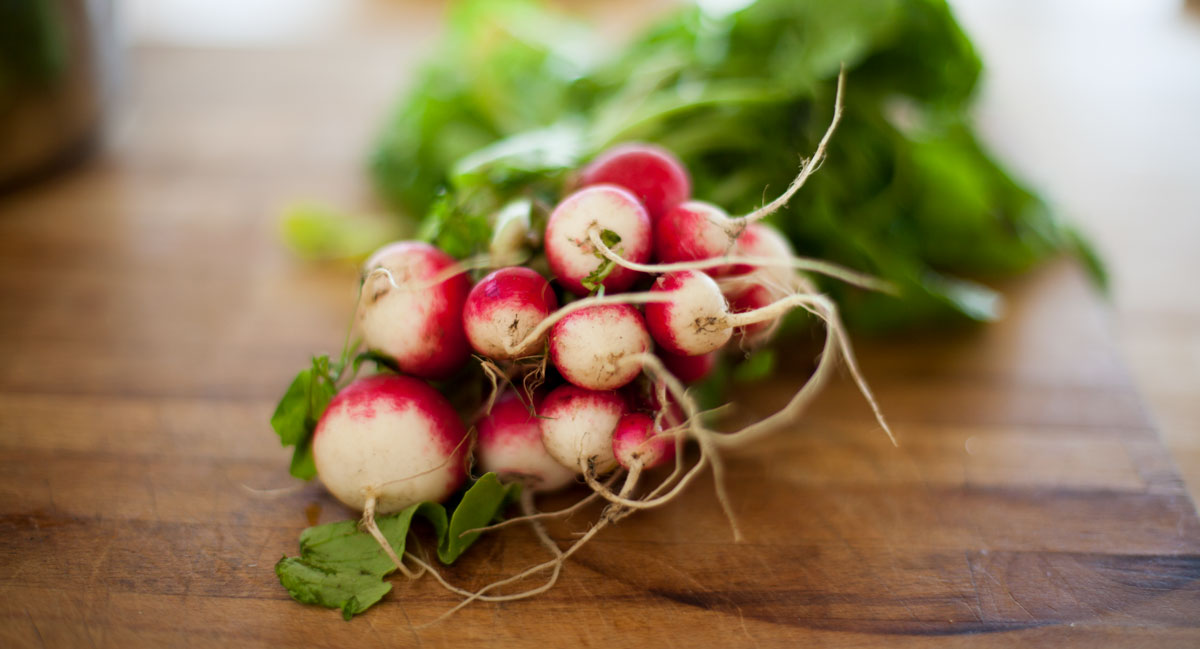 Ravishing radishes; quick and easy to grow they are often the first spring crop.  With their delicious crunchy texture and peppery taste they are real delight after the dull months of winter.

How to grow tasty radishes

Sow indoors from late winter or sow directly from late spring through to early autumn.
Radishes can be planted from as early as the soil can be worked. Make successive plantings of short rows every 10 to 14 days. Plant in spaces between slow-maturing vegetables (such as broccoli and brussel sprouts) or in areas that will be used later for warm-season crops (peppers, tomatoes and squash).

Radishes do best in full sun, but will tolerate small amounts of shade. Provide your radishes loose, well-draining fertile soil with a pH of 5.5 to 6.8. To increase the fertility of the soil, fertilize the planting space with aged organic compost prior to planting radishes.
Sow thinly, 1.5cm deep in rows 25cm apart.  Keep moist and thin as necessary.

Repeat sowings every two to three weeks to ensure a continuous supply. Remember, it is much more economical to sow little and often rather than have a long row of radishes all coming to maturity at the same time.  Early radishes can be grown in the tunnel but later ones are better outside.

Radishes belong to the Brassicaceae (or Cruciferae) family.

How to avoid radishes that split or are woody

Most radish problems are a result of not giving the crop enough attention.  They might be easy to grow but neglecting them will result in a poor crop.  Make sure they are properly spaced and adequately watered.  If you grow radishes commercially you could consider using a seeder for accurate sowing.

Proper thinning focuses the harvest and avoids disappointing stragglers that have taken too long to develop. Slow development makes radishes hot in taste and woody in texture.

Radishes are a moisture-loving plant. Moisture stress can result in the same woody, hot radishes that poor soil conditioning and lack of fertiliser or humus will result in. If you do not provide your radishes with moist soil, you are likely to notice an overly hot or spicy flavour.

Splitting is often a result of uneven watering. 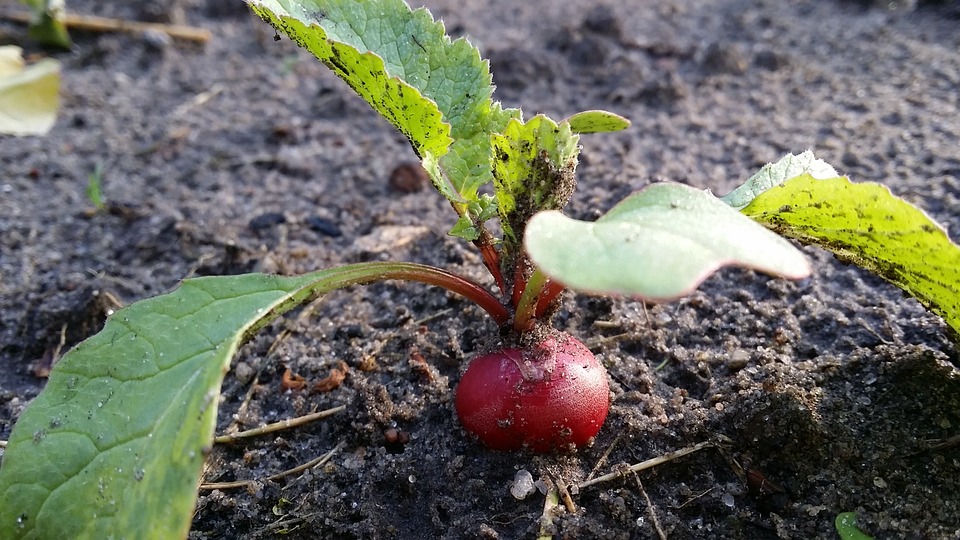 Harvest your radish crop within the appropriate amount of time. Otherwise, you run the risk of your radishes splitting, cracking or developing an unpleasant spongy texture and spicy flavour.  They need to grow fast and be harvested as soon as they reach their mature size. Leaving them stand in the soil will not improve taste or texture.

Radish can be susceptible to flea beetle. The adults feed on the leaves and the larvae on the roots. These small beetles are 2-3mm in length, with the enlarged hind-legs that enable them to leap off plants when disturbed. You will notice holes in the upper leaf surface; often these do not go all the way through the leaf. The damaged areas dry up and turn pale brown. Seedling plants are particularly susceptible to damage by the adult beetles and the growth of older plants can be checked if infestations are heavy.

You can avoid flea beetle by ensuring rapid germination and development of seedlings so that they grow through this vulnerable stage quickly. Keep radishes watered during dry spells and avoid sowing into cold soil.  Covering seedling plants with insect proof netting will reduce damage by excluding the adult beetles.

These have a milder taste and grow from July onwards. A staple of Japanese and Korean cuisine, 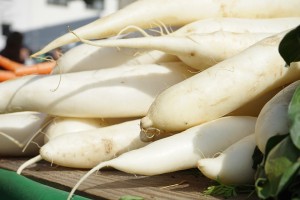 Mooli type radishes are unbelievably fast-growing even in the cool, shortening days of autumn.  Can be grated into salads or cooked like turnips.  The roots can be harvested after the first mild frosts without much damage and well in a cool dark place.

Radish contains phytochemicals and anthocyanins that have anti-carcinogenic properties. Additionally, they have vitamin C that acts as a powerful antioxidant to prevent free radical damage to the DNA inside the cells, thus helping cancer prevention.

Radish has anti-hypertensive properties that help regulate control high blood pressure. Radish is rich in potassium that helps maintain the sodium-potassium balance in the body, keeping blood pressure under control.

Radish also has anti-congestive properties which helps in clearing the mucus formed in your throat. Additionally, radish also improves your immunity which keeps infections that lead to cold and cough at bay.

Radish is powerful when it comes to eliminating toxins. This helps keep your liver and stomach in mint condition. They are effective in controlling jaundice as they help to regulate the amount of bilirubin in the blood and increases the oxygen supply within the body. This helps keep a check on the destruction of red blood cells caused by jaundice.

Radish has a high fibre content which helps clear the food stuck in your colon. Additionally, it helps facilitate the secretion of digestive juices and bile which again is good for your digestive system.

Containing vitamin C and antioxidants, radish can be eaten to prevent your skin from free-radical damage. You can even apply crushed, raw radish on your skin as it has cleansing properties!

The natural diurectic property of radishes makes them extremely good for improving kidney health. They help elimination of toxins from the body, acting as a natural cleanser.

Radishes are very good with a little salt and beer. Perfect after a long day in the garden!  They are also very good in a mixed salad.

This entry was posted in All Articles, Home & Healthy Living, Seasonal and tagged Growing, Eating, May, Radishes on 24th May 2017 by Muireann. ← Previous Post Next Post →