Bolting refers to when a plant rather rudely decides to enter its flowering stage before we would like it to. Essentially, it has come to the conclusion that it is time to produce seed, and energy previously flowing into leaf growth is diverted to this task. As a result, the leafy part of the plant, which we were more than likely planning on eating, is lost to woody, not so tasty, and sometimes more bitter material. Bolting is essentially a survival mechanism which is triggered for a number of reasons. The factors which contribute to a plants susceptibility to bolting come from two powerful forces - those of Genetics and the Environment.

Plants, like most forces of nature, are genetically programmed to reproduce. It is worth taking a look at a plant's typical life cycle and where it came from to appreciate the conditions which can stimulate its premature flowering.

Annuals such as spinach and lettuce which have a propensity for bolting are a long way from home here in temperate Ireland. They originated from the Fertile Crescent in the Middle East where the region is characterised by intensely hot and arid summers and are still largely influenced by this heritage. In climates like this, annual plants evolved to germinate in a cool autumn, grow slowly through a winter of cold short days before steady spring growth and a reproductive phase that sets seed before the return of the summer drought. So, contrary to native Irish plants, which try to set seed to endure a cold dark winter; plants from hot regions tend to produce seeds to survive an inhospitable summer of long blistering days. Knowing this we can see how the lengthening days of summer can trigger these latent ‘desert’ genes to spring into action. The plant rushes to flower and produce seeds before the desert summer it’s expecting. It’s safe to assume that our spinach is as disappointed as us when it discovers what an Irish summer actually resembles.

In these annuals, flowering is generally triggered by the photoperiod, that is, how many hours of daylight the plant receives. They are ‘long-day’ plants which flower when day length increases. This is why flowering occurs earlier in higher latitudes such as where Ireland is located and summer days are long.

Plants adapt slowly to changing landscapes and climates as they migrate naturally. This natural genetic adaptation has been steered by farmers for millennia by how they manage and save seed. More recently, plant breeding has become itself a profession and crops have changed radically in the last number of decades. One result of this is the development of varieties which are much more resistant to bolting as the day lengths required to trigger the process are stretched out. For instance, modern spinach varieties are much more bolt resistant than those developed before the 90’s.

What we can do

Knowing that bolting has a genetic basis, we can think about how to minimise it happening to our crops. Annuals are expected to flower in their first year but the conditions should be good so as a rapid growth of the usable portion of the plant (such as a lettuce head) develops before this happens. 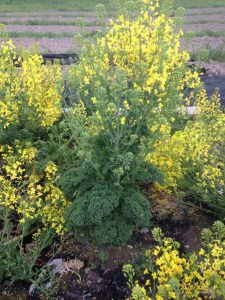 In contrast to annuals, some biennial crops (those that normally grow in the first year and flower in the second) like onions, leeks, chard and cabbages can also bolt in the first year. These crops have evolved to produce a lot of energy in a storage organ in the first year. This could be a big taproot in the case of carrots, an onion’s bulb or the head in a cabbage. The plant puts this extra food source to work in the second year to produce its seeds. Generally this increased energy source allows the plants to produce vastly more seed than their annual counterparts and this is probably the main advantage with this strategy. As such, biennials need to feel they’ve gone through a winter to initiate flowering.

This gives us more than a hint as to why unsettled weather is the main culprit behind bolting biennials. This is usually a problem early in the season where cold spells and late frosts can manifest suddenly. A good rule of thumb is to not start susceptible crops too early. Another strategy is to protect plants from early frost with crop covers. As with annuals, biennials should be free from stresses such as drying out and lacking nourishment. Sometimes it is possible to halt the bolting process by nipping off the flower buds. This can be done with onions and works particularly well with basil which usually goes back to producing leaves for a while.

A final option against bolting is to just let it off. It can be interesting to watch plants flower that we would not normally see otherwise. Bees will be forever in your debt, and also, the flower shoots of some crops can be a tasty treat, With Tuscan kale, the second year's flower shoots can be as delightful a harvest as the previous year's leaves.

This entry was posted in All Articles, Grow-How, Small & Starter Growers and tagged Growing, How to.., Onions on 21st June 2017 by Muireann. ← Previous Post Next Post →