This entry was posted on 22nd February 2017 by Muireann. 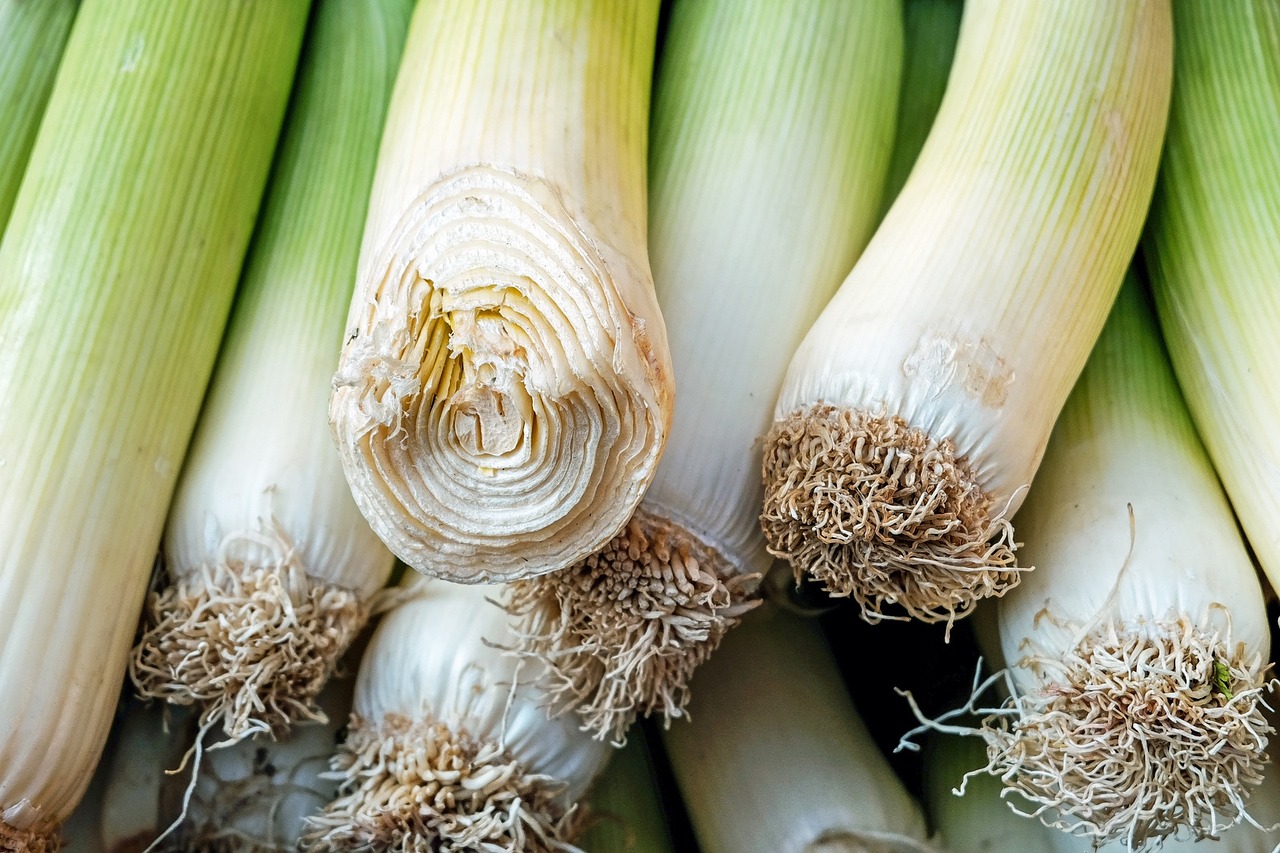 Leeks are one of the most underestimated of all winter vegetables. Once dubbed “Poor-man’s Asparagus” the leek is one of the world’s oldest known vegetables, with its own set of nutritional benefits and flavours, leeks have been part of the human diet for thousands of years.
Leeks are part of the allium family and are closely related to onions, garlic, shallots, and scallions with a milder taste and larger in size.

Leeks are a phenomenal source of vitamins and of antioxidants:
They contain powerful antioxidants for staving off disease (even when compared to other antioxidant-rich foods) and eliminating free radical damage. Leeks contain large quantities of vitamins A and K, along with folic acid, niacin, riboflavin, magnesium, and thiamine. It provides us with 52% daily requirement of vitamin K, and a more than 29% daily requirement of vitamin A.
Leeks contain healthy amounts of folic acid (needed for proper DNA absorption and cell division), as well as niacin, riboflavin, magnesium which are all needed for healthy bones. Adequate intake during pregnancy can help prevent neural tube defects in newborns.
When sliced or chopped, the many antioxidants leeks provide begin converting to allicin. Allicin which provides an abundance of important attributes to the body, such as anti-bacterial, anti-viral and anti-fungal activities, and reducing cholesterol by impeding harmful enzymes in liver cells.

Leeks are easy to grow from seed, but need looking after.
Unlike onions or garlic, leeks do not form bulbs or produce cloves but develop an edible 15cm – 25cm long round stem, which can grow up to 5cm in diameter. The leek has leaves that are dark green and flat.

Sow outside in late March - earlier sowings can be made as early as late January if the seeds are sown in trays and kept in the greenhouse at a temperature of 13 deg C. Keep the seedlings in the greenhouse until March, then begin to harden them off in a cold frame; until they can be planted out.

Leeks prefer a sunny, sheltered and well-drained site.
Transplant the leeks into the ground when they're about 15-20cm tall. Use a broom handle to make holes 10-15cm deep and about 15cm apart. Leave about 30cm between rows. After trimming some of the roots and the tops off, carefully lower one leek plant into each hole.  Do not fill in with soil.  Instead fill each hole to the top with water. As the water drains down it will draw enough fine soil with it to cover the roots. The remainder of the hole will naturally fill in as you hoe.

Earth up the soil periodically:

During the growing season, ridge the soil towards the base of the leeks, so that it reaches the place where the leaves cleave apart. The higher the hill, the more of the leek is hidden from the sun, this will make that part lighter in colour and more tender and the edible white part of the leek will be larger.  However, earthing up too high can cause the leeks to rot.

Leeks need two things to thrive well: lots of nitrogen and consistent soil moisture; in dry weather they must be watered allowing the roots a thorough wetting.
Regularly keep down the weeds using a hoe.

You can start pulling leeks from the ground just about any time. The first leeks are normally ready during September and harvesting can continue on until April the following year. Start the harvesting when the leeks are still quite small to ensure a long harvest period. Usually, you’d let them get at least 1 inch or larger in diameter for the typical big white stems, but you can dig young ones to eat like scallions. Leeks are frost-tolerant and can remain in the ground through the winter until they are needed; loosen the soil around the stem with a fork before gently lifting them up as required.  Will start going to seed in May - flower heads are very good for dried flower arrangements.

Leeks are almost always dirty inside, when leeks are grown; soil is piled up around them, resulting in sand and dirt being lodged deep inside the leek.
To clean out the dirt; 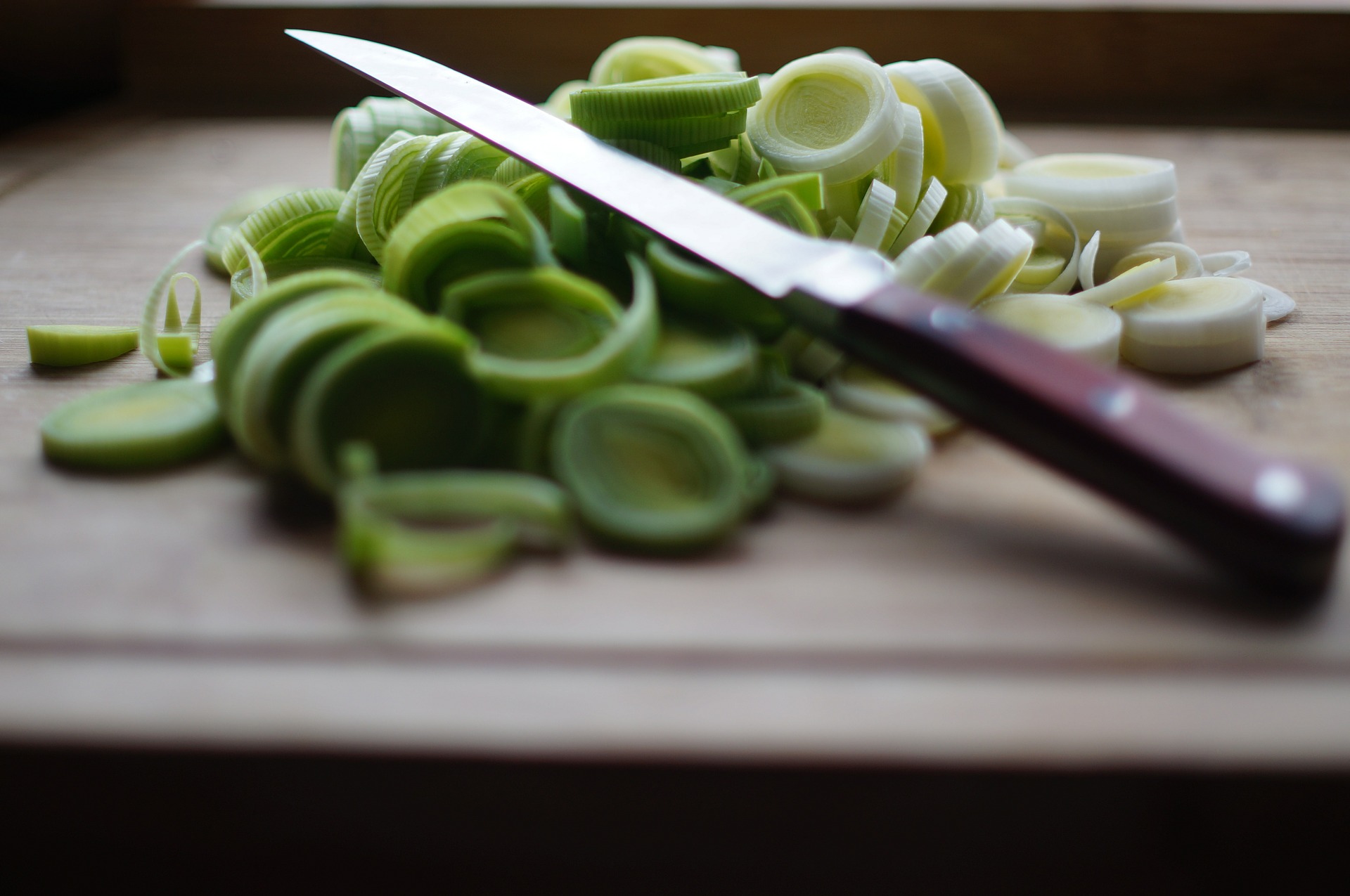 Leeks work well added to everything from salads to soups, when cooked at a low heat, leeks slowly break down into a succulent base; try it with pasta sauces or risottos. They also do not have to be considered merely an add-in, leeks can stand up very well on their own in a variety of side dishes.
They add beneficial fibre and bulk along with vitamins, minerals, and antioxidants (mentioned above). Leek adds a distinctively delightful flavour to a variety of dishes and do not taste as pungent as the onion.